Request to hold an event in one of our parks 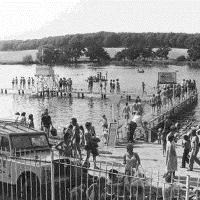 The lake has a history going back over 200 years. It was originally constructed amongst woodland in the area.

The landscape much of which was designed by Ralph Knight of Langold Hall in the 1750s associated with the former Langold Hall. Ralph Knight was responsible for much of the planting and also created a series of lakes and ponds. His grandson Henry Knight made alterations in 1818 including the conversion of the existing lakes and ponds into two inter-connected man-made lakes to form part of a formal landscape with the intention to build a large house but it was never constructed. By the 1890’s a weir with a single arch bridge with boathouse underneath had been constructed. The 19th century boat house still exists today.

During the 1920s the area was developed for mining with the former Firbeck Colliery site located to the east of the park. The Firbeck Colliery Company purchased the land in July 1927 and became a leisure facility for the Langold miners principally for fishing. In 1946 the coal mining industry was nationalised and the National Coal Board expanded the leisure facilities in the park.

A Colliery Sports Club was formed with a subscription of 2d (about 1p now), stopped from the men's wages. A children’s swimming pool (lido) and bandstand added (repaired in 2012) as a recreational park.

In 1968 the mine closed and the park was taken over by the local authority. Mining equipment was removed to make way for a children's playground and refreshment facilities. The dam and bank at the east end of the lake were rebuilt c1975. The Lido was removed in 2013 and new play facilities added in 2014. 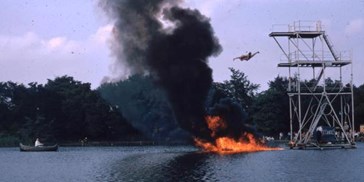 The first Langold Gala was held in 1929 with accounts claiming that 10,000 visited the Park.

The Park came particularly well known and popular for its swimming. The British Long Distance Swimming Association Championship were traditionally held at the Lake. There were children's events in the bathing pool and demonstrations by the country’s top swimmers, also synchronised life-saving displays and comedy items by Swimming Club members. Spectacular stunts included explosions, when the Colliery agent dive-bombed the cadet field, narrowly missing bell tents. Other stunts included a submarine explosion, trapeze artist, ‘The Great Alganso’ a tight rope walker, as well as Jack Revel, known as Mr Langold Lake who was renowned for his dare devil dive from the 35 foot diving board into a patch of burning petrol- performed until 1978.

There were rowing boats at the Lake for a number of years. One custom was the annual Christmas day swim when a number of ‘hardy’ villagers would take the plunge, even if they had to break the ice.

Request to hold an event in one of our parks