A Moot Hall was erected by the town in 1388 in the Market Place, between the Square and St Swithun’s Church, built of timber and slate. It was replaced by a similar building after a fire which destroyed much of the town in 1528.

John Piercy, a local historian, described this Moot Hall in 1828:  “The roof was surmounted by a small cupola, of a very antiquated appearance, containing a bell, but no clock. This bell was rung at the commencement of the markets, and was also used for summoning the inhabitants to attend the courts, and the Council sessions, etc. Underneath the hall, were the shambles. The body of the hall was usually appropriated to the performance of theatrical and other amusements until at length it was deemed imperatively necessary to take it down to prevent it from falling. In 1754 the corporation resolved upon its demolition.” 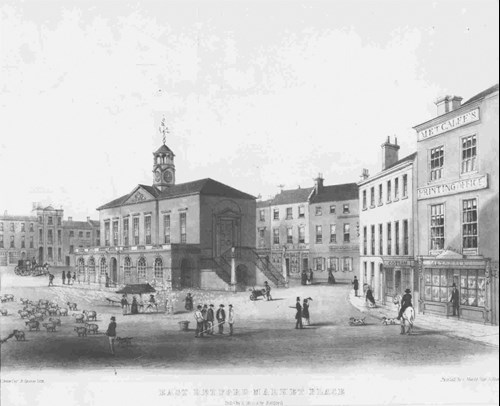 In 1755 a Town Hall was built on the site of the old Moot Hall. It was used for similar functions and had a bell, a clock and a weathercock. Underneath the council and court room and the assembly room were the shambles [weighed meat market].  The markets for other goods were held outside to the east, however, the corn market was held in the Square.  In 1864 it was decided that this building was an obstruction to traffic passing through the town and a new site was sought, with the Town Hall demolished in 1868.

The present Town Hall on the south of the Square was started in June 1866 and opened in January 1868, built on the site of an 18th century townhouse. This was one of a group of new civic buildings. 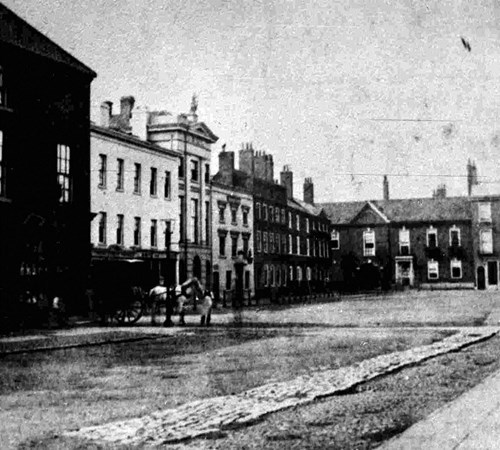 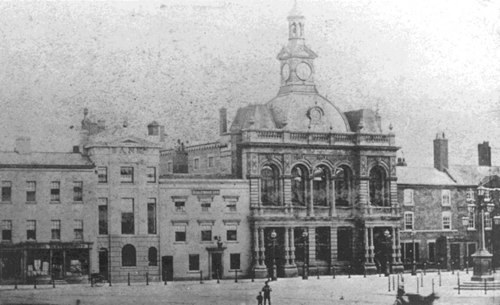 A design competition for architects had been held by the Corporation, won by the Lincoln firm of Bellamy and Hardy after public inspection of all the designs.  There were concerns from the townspeople regarding the cost and the site of the new buildings that had to be resolved before construction.  In the end the land cost £2,000 and three buildings £7,000 including the Shambles and Corn Exchange on a new road to the south, Exchange St. A new Court House was also built there.

The Town Hall included a grand-staircase, a ball-room with gallery, and Council chamber and Mayor’s Parlour on the first floor, a butter and poultry market, and County Court offices, on the ground floor, and a hall-keeper’s residence at the rear including catering kitchens with a lift to the ball-room. Features from the previous town hall were transferred such as the clock and two chandeliers.

Most of the building is brick although the front is of Bath stone (a limestone), with the plinths and columns of Nottinghamshire Mansfield Red stone. The design is Italianate with the roofs of French mansard design. The clock tower resembles the previous Town Hall clock tower; a new clock and bells were provided in 1902, although the bells are no longer used. 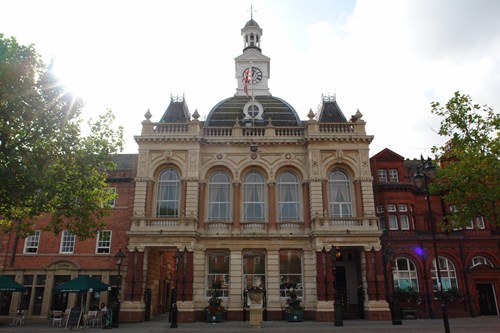 In the 1930s a larger Court House replaced that of 1868, and a Mayor’s Parlour was created from the two offices at the front of the Town Hall.

The Town Hall is a Grade II listed building. Substantial alterations took place in 1978 when the bar and cloakroom areas were created from part of the Old Bank building next door, purchased in 1926 for council use.  Maintenance and restoration to the front stonework and other areas are periodic necessities; the latest works were in 2012.