Bassetlaw District Council, is currently preparing a final submission to the Government’s ‘Levelling Up Fund’ to transform Worksop Town Centre, based on the outcomes of a consultation with residents and local businesses.

A Levelling Up Project Board was formed in April, with an independent chair and consisting of key stakeholders including: Brendan Clarke-Smith MP, the Leader of the Council, BCVS, The Canal and River Trust, Nottinghamshire County Council, East Midlands Chamber of Commerce, North Notts College, Stagecoach and the Environment Agency.

The board have been meeting regularly to discuss the priorities put forward by residents and local business on what they would like to see developed or changed in the town centre and how these fit together with Government guidelines on Levelling Up Funding.

The key themes received from the consultation are: (shown on the map below): 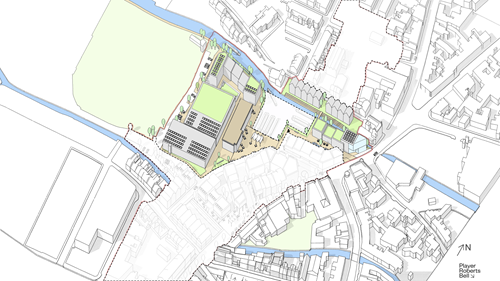 The key themes that have been identified will form a short term vision for Worksop Town Centre, which can be delivered by 2025 through the Levelling Up Funding that is currently being bid for.

The delivery of this short-term vision will act as the catalyst for change in the town centre and unlock funding and investment to deliver projects and development as part of a long-term vision.

The Long Term plan sets out a 15 to 20 year vision for Worksop Town Centre, delivering a mix of offices, retail and quality residential housing. Another key priority is a focus on the local waterways to get the most out of the Chesterfield Canal and address flooding issues from the River Ryton.

Andria Birch, Chair of the Levelling Up Board & Chief Executive of BCVS said: "It has been positive to see diverse voices of local communities and the voluntary and community sector considered fully and informing the proposals that are being developed. I look forward to the next steps and seeing a strong bid prepared and submitted as a result."

Cllr Simon Greaves, Leader of Bassetlaw District Council said: "Levelling Up Funding is key to the future of Worksop Town Centre, both now and in the longer term. At the moment the town centre faces an unprecedented challenge, it really is now or never. Working with the partners on the Levelling Up Board and with the support of our MP in Parliament we have a real opportunity to deliver on residents and business priorities. Levelling Up Funding can begin the transformation we need and act as a catalyst for further investment."

Brendan Clarke - Smith, Member of Parliament for Bassetlaw said:  "It is important that the local community has an opportunity to shape the regeneration proposals for the area so I would encourage everyone with an interest in Worksop's future to let us know their views about the proposals so far."