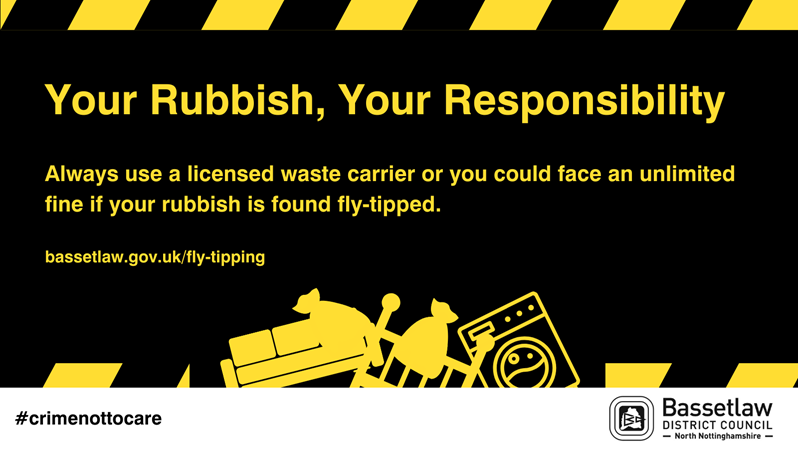 What is Fly Tipping?

Fly tipping is the illegal dumping of any type of waste on publicly owned or private land. Some examples of the types of waste dumped are:-

This list provides just a small selection of waste that is regularly fly tipped in the District.

Dumped waste blights the local environment and poses a threat to human health, wildlife and the overall environment. It costs the Council around £100,000 a year to clear up fly tipped waste and dispose of it – a cost passed on to local taxpayers and landowners.

Fly tipping is a serious crime which carries an unlimited fine, up to five years in jail, seizure of vehicles – just a taster of what can happen to anyone who fly tips waste.

The combination of recycling centres for householders to deposit waste at and a bulky waste collection service offered by the Council for a small fee means there is absolutely no excuse for anyone to fly tip.

Householders are now required to check that anyone they allow to remove their waste is authorised to do so. Contact the Environment Agency on 08708 506506 and ask for a waste carriers check – it’s that easy!

Who Deals With Fly Tipping?

The Council and the Environment Agency are empowered to investigate and take action against fly tippers and often work in partnership.

The Council investigate mainly multiple one off incidents of fly tipping and are responsible for clearing waste dumped on public land. Larger scale fly tipping involving organised gangs fall to the Environment Agency to investigate.