Figure 1 illustrates the relationship between Bassetlaw District Council and the neighbouring authorities. 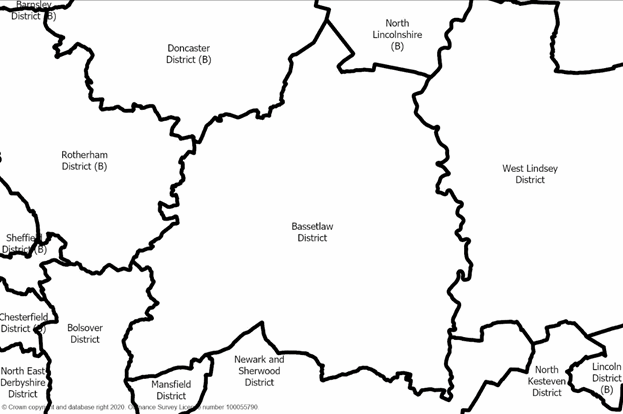 The Duty to Co-operate is a requirement of the Localism Act 2011 and the duty requires the Council to cooperate with other local planning authorities and other public bodies in preparing and developing development plan documents and other local development documents so far as it relates to a strategic matter 1.

In this regard, the Council and others are required to engage constructively, actively and on an ongoing basis. The national planning policy framework (NPPF) states that “strategic policy-making authorities should collaborate to identify the relevant strategic matters which they need to address in their plans.”2

The NPPF strengthens the concept of the Duty to Co-operate by requiring that Local Planning Authorities produce and publish one or more Statements of Common Ground (SoCG). These documents should be kept up to date by authorities and prescribed bodies and neighbouring authorities to document cross boundary matters and the progress made on them (paragraph 27). This is detailed further in the government’s Planning Practice Guidance (PPG).

The Localism Act 2011 and The Town and Country Planning (Local Planning) (England) Amendment Regulations 2012 sets out a list of prescribed bodies; it applies to all Local Planning Authorities, County Councils and a number of public bodies.

Bassetlaw DC has the duty to co-operate with the following neighbouring authorities and public bodies:

In addition, as described in the Regulations as being bodies that should ‘have regard to’ includes the Local Enterprise Partnerships (LEPs) and Local Nature Partnerships. In relation to Bassetlaw DC this includes:

Record of Meetings and Statement of Common Ground

Bassetlaw DC attend multi-agency and authority groups which meet regularly to discuss strategic issues and cross border matters. A full list of meetings is included in Table 2 in the Appendix.

Table 2 in the Appendix is a summary of all the key meetings and discussions with key stakeholders during the preparation of the emerging Local plan, carried out between 2016 and 2020. These discussions related to the Local Plan timetable, regular updates and specific meetings relating to strategic policy matters and cross border issues. More recently there have been discussions and meetings relating to the preparation of specific draft Statements of Common Ground agreements with organisations.

Statements of Common Ground (SOCG) set out areas of agreement with key bodies and organisations in relation to the Local Plan, the wording of policies and site allocations. These provide a good indication of the ongoing contact and agreements made with Duty to Co-operate bodies during the Local Plan process and outlines any outstanding disagreements on key strategic issues or matters, where discussions and work may be ongoing.

Some agreements or SOCG are already in place in response to neighbouring authorities’ Local Plans or strategy preparation and include:

Bassetlaw DC’s draft Statements of Common Ground have been prepared with the above statements in mind; either referring to them or updating them to avoid duplication. They are live documents which are to be kept up to date during the Plan preparation period and will be signed prior to the plan’s submission for examination.

In addition to the list of meetings in the Appendix, there has been communication of an informal nature during the plan period between the Council and neighbouring District Councils, County Councils and bodies in relation to the overall Local Plan, site- specific issues or specific policies. These communications have taken place through telephone calls, emails and more recently online meetings, due to COVID19 and the restrictions that placed on physical meetings between the dates of March 2020 to November/ December 2020.

Key ‘Strategic Priorities’ that remain the focus of the plan Spatial Strategy include:

The relevant strategic matters of the Local Plan include:

Bassetlaw Council has worked collaboratively across organisations and neighbouring authorities to produce a number of pieces of evidence to support the Local Plan on a range of strategic matters; these are ongoing and some are still to be updated as set out in Table 1.