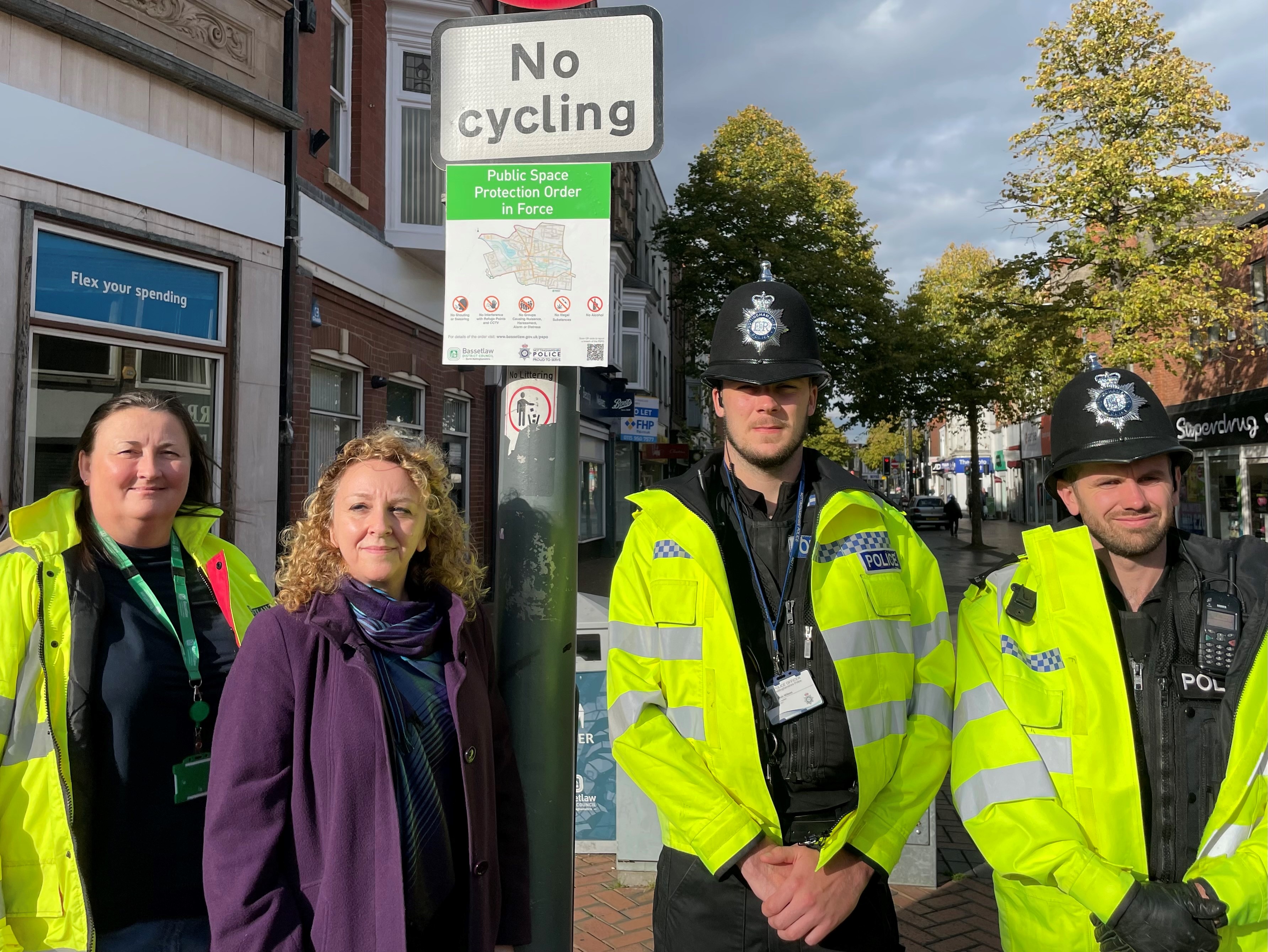 They will focus on dealing with street drinking, substance misuse and aggressive begging during regular high-visibility patrols on days, evenings and weekends in the town centre and near the Canch public park.

As well as having powers to issue fixed penalty notices, they will gather first-hand evidence of anti-social behaviour and criminal activity and will report incidents to Nottinghamshire Police and Bassetlaw District Council’s Anti-Social Behaviour Team for further action.

They will also signpost people with complex needs, including substance misuse, to support services in a bid to keep them off the streets and prevent reoffending.

The street wardens are being funded by the Home Office’s Safer Streets scheme, following a successful bid by the Office of the Police and Crime Commissioner for Nottinghamshire, in partnership with Bassetlaw District Council and Nottinghamshire Police.

They will be an additional resource to complement the ongoing work of neighbourhood police officers and the council in the area. They will also be in addition to existing council street wardens who deal with environmental issues such as litter and graffiti.

“Having this extra resource will give a real visible and tangible improvement to safety on the streets of Worksop,” said Phil Gilbert, Safer Streets project lead for the Office of the Police and Crime Commissioner.

“They will be on hand in the right areas at the right times to deal with issues quickly and effectively whilst providing an extra uniformed presence that will be reassuring for people as they go about their daily business.

“By sharing information and working closely with the police, the council, the CCTV control room, ShopWatch and PubWatch, these street wardens will bolster the existing network of support for everyone.

“Safer Streets is a national scheme aimed at preventing violence against women and girls in public, neighbourhood crime and anti-social behaviour. On the streets of Worksop it will mean that people who live or work in the town, or who visit for a night out, can feel confident that they are safe and supported.”

As well as street wardens, Worksop will also benefit from £40,000 of improvements to street lighting, making the area brighter and more reassuring for people at night. Council officers will now get to work on identifying the areas where better lighting can have the greatest impact.

Safer Streets funding will also be used to pay for training for staff at licensed premises in Worksop in how to prevent violence against women and girls, and support those affected. The Stand By Her training programme will be delivered by Women’s Aid.

Councillor Julie Leigh, Cabinet Member for Neighbourhoods at Bassetlaw District Council, said: “This will be a great opportunity for us to pilot new Safer Street Wardens in and around Worksop whose focus will be providing a visible presence to offer public reassurance whilst dealing with anti-social behaviour, including any breaches of the Public Spaces Protection Order.

“They will also work with and signpost those with vulnerabilities to appropriate support services as part of the wider Community Safety Partnership in Bassetlaw.”

It comes after Worksop also benefitted from the previous round of Safer Streets funding which saw the installation of five Refuge Point camera systems in the town centre earlier this year. This innovative technology, which combines CCTV with the ability to instantly speak to the control room in an emergency, gives residents even more peace of mind when they are out in public spaces.

Police and Crime Commissioner Caroline Henry said: "I am delighted to be able to bring even more national Safer Streets funding to Worksop, to help improve safety and feelings of safety.

"I am passionate about preventing violence against women and girls in public, neighbourhood crime and anti-social behaviour and this funding is a massive boost for our efforts in these areas.

"My office has worked closely with Bassetlaw District Council on this successful bid and we will continue working side-by-side to implement these plans, giving residents further reassurance on the streets of Worksop."

Nottinghamshire Police Inspector Hayley Crawford, District Commander for Bassetlaw, said: “These wardens will be a great asset to Worksop in providing even more reassurance to local residents.

"It’s a great opportunity to further improve the strong relationships we already have with our partners and have even more resources out on the streets of Worksop keeping people safe, providing advice and putting a stop to any concerning behaviour.

"We have been working incredibly hard over recent months and years to make sure people feel safe with the help of the Safer Street scheme and cracking down on anti-social behaviour and the impacts this can have on residents in the area.

"The introduction of four wardens is a great addition to my officers who are always out patrolling the streets and making sure the people of Worksop are kept safe."

The Safer Streets funding for Bassetlaw was part of a joint bid with Newark & Sherwood District Council for £750,000 for projects across both districts.

This was one of four successful £750,000 applications across Nottinghamshire, meaning a total of £3 million of Safer Streets funding was secured by the Office of the Police and Crime Commissioner for Nottinghamshire – the highest sum given to any county area nationally.

Home Office Minister Jeremy Quin said: "We are determined to drive down crime and are investing in more police and targeted interventions. I am pleased to see this targeted funding being put to good use in Nottinghamshire where we are investing £3 million across four projects."

Anyone interested in becoming a Safer Streets warden should visit our Jobs and Careers page, visit our 'View our current job vacancies online' and search for Safer Streets Warden.