Tenant evicted after not paying more than £3,000 of rent 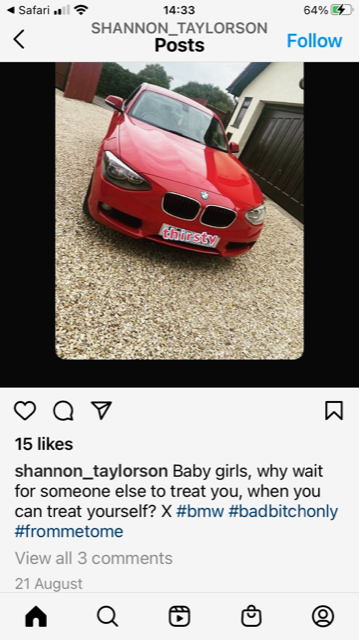 A Bassetlaw Council Tenant has been evicted after she amassed more than £3,300 of rent arrears while spending thousands of pounds on luxury cars, weight-loss treatments outside of the UK and lavish nights out with friends.

Shannon Taylorson, 26, was evicted from her two-bedroomed flat on Amanda Road in Harworth on 16 March 2022, following a hearing at Mansfield County Court on 23 December 2021 where District Judge McMillan granted Bassetlaw District Council possession of the property.

As part of the possession hearing, the court heard how Miss Taylorson failed to pay her rent and amassed a total of £3,307.63 of arrears between October 2020 and December 2021. During this time, the Council had gathered evidence which showed that the defendant had bought herself a luxury BMW sports car, had travelled to Turkey for a surgical weight-loss treatment and had enjoyed lavish nights out in Manchester, all of which was flaunted on social media.

Miss Taylorson had been a tenant since August 2019 but claimed that she had lost her job in November 2020 which contributed to the arrears. However, Miss Taylorson had received the housing element of Universal Credit, which was not passed onto the landlord until June 2021 when the Council applied to the DWP to receive the payment directly. These debts were compounded by Miss Taylorson under occupying the property and the benefits she received not covering all of the rent due.

Miss Taylorson had also received a Discretionary Housing Payment of £1,227.50 in February 2021 to clear some of her outstanding rent, yet she still continued to accumulate debts despite offers of support from the Council’s Tenancy Sustainment Service. These offers included looking at her income and outgoings to address the debts and help her with downsizing to a more affordable one-bedroomed property. These offers of support were refused by Miss Taylorson.

In addition to being evicted from her home, Miss Taylorson must also pay back the rent arrears she accumulated in addition to the Council’s legal costs, totalling £4,878.51.

Cllr Steve Scotthorne, Cabinet Member for Housing at Bassetlaw District Council said: “Gaining possession of someone’s home is always a final resort, but when a tenant chooses to indulge themselves in a lavish lifestyle rather than pay their rent the Council is left with little option.

“Our Housing Team provided Miss Taylorson with ample opportunities and offers of support to rectify the situation and maintain her tenancy. Sadly these were not accepted by the tenant and the Council was forced to resolve the situation through the courts.

“Council Housing in Bassetlaw is in great demand and we have thousands of tenants who pay their rent each week without any fuss. I’m pleased that this home can now be re-let to someone who will appreciate their new home.”