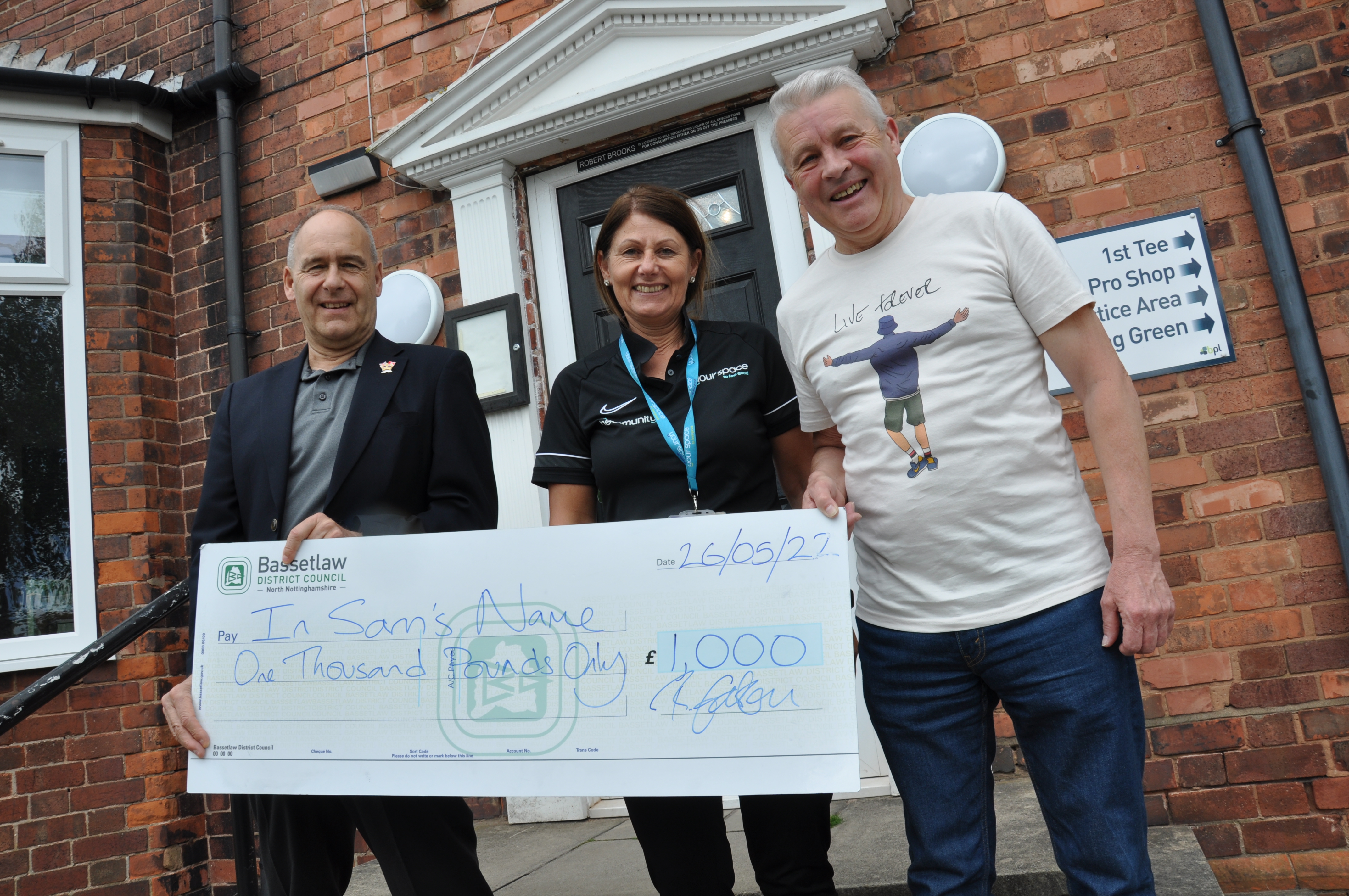 Bassetlaw based support group ‘In Sam’s Name’ has received a cash boost to enhance their work of promoting positive mental health and preventing suicide in young men.

Cllr Tony Eaton, Ward Member for Worksop South has donated £1,000 from his Councillor Community Grant to help the group after learning about their vital work, and presented Stewart Fisher with the money earlier this month.

Sam Fisher was a teacher at Prospect Hill Junior School, in Worksop, as well as being an enthusiastic traveller having visited and taught in countries like America, China, South East Asia and Australia. However, it was while travelling in Australia in October 2021 that Sam tragically took his own life at the age of just 29.

Shocked by Sam’s actions, friends Richard McHugh and Kurt Lewis set up the support group ‘In Sam’s Name’ with the blessing of Sam’s family and his father Stewart with the aim of preventing suicide in young men.

Stewart said: “Sam was a fun loving lad and what happened is tragic. But it also started ‘In Sam’s Name’ which has done a lot of good for Worksop and other men who are in the same position that Sam was in.

“When we lost Sam, there were a lot of young men who were heartbroken and told us things about Sam that we never knew – and they talked about how they were feeling. We didn’t know how Sam was feeling at that time, but I know he was brought onto this planet to do some good.”

“A crowd funding page was set up to help bring Sam home from Australia, and from that we were also able to help some local charities like Survivors of Bereavement by Suicide (SOBS) in Bassetlaw and Joe’s Buddy Line, which talks to young people about mental health, as well as Prospect Hill Junior School.”

“The group has been going for seven months now and I’m amazed how quickly people started to talk. Some people come every week, some only come once or twice – but the doors are always open.”

The ‘In Sam’s Name’ Group meets at The Edge (Oasis Centre) on Plantation Hill, Worksop on Thursdays every two weeks at 7pm and enables men to come together and have a cuppa and a talk about any issues that may be affecting their mental health.

Cllr Eaton, who is also Bassetlaw District Council’s Armed Forces Champion, said: “I was using The Edge for a Veterans group and stumbled upon ‘In Sam’s Name’. I think it’s a brilliant initiative and once I’d been I couldn’t stop talking about it. I think it really works and is helping a lot of young men who don’t know where to turn for help and support.

“It’s crucial and I’m amazed how quickly it’s taken off and how successful it has been. Poor mental health can affect anyone and the group joins up with all the work we do with veterans. It’s a fantastic cause and I’m thrilled that I can help in some way.”

In addition to their regular meetings at The Edge, ‘In Sam’s Name’ encourage people to join them on regular Sunday morning walks starting at the Kilton Showgrounds Car Park.

Stewart added: “I’d like to thank Cllr Eaton on behalf of the group and this money will be used to help people and get them out into open spaces, give them an experience and more opportunities to talk. It will also be used to signpost people to professional help if that person wants and needs it.”

“The walks are nothing strenuous and all ages are welcome. As people are walking they might want to get something off their chest and we are there for people to open up to whatever might be troubling them.

“We’ve had some success and I hope that we’ve supported people through their issues and have prevented some people from taking their own lives.”

Pictured from left to right, are: Cllr Tony Eaton, Angela Dainty – Health and Well-being Officer at BPL, and Stewart Fisher.