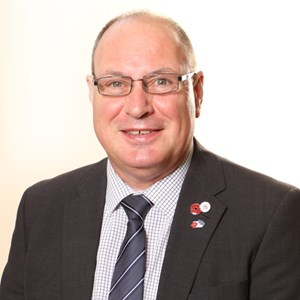 Surgery Details:
Roving surgeries across the ward and willing to meet any resident - contact 07709 812 331
Committees:

First elected to Bassetlaw District Council in 2015, Garry is committed to working with local people and fellow Councillors in order to bring about improvements to the town of Retford and the district.

Garry was born in Retford, and has lived in each ward across the town. He previously worked at West Burton Power Station before gaining a scholarship to Ruskin College, Oxford. He then studied for an honours degree in History and Politics at the University of Sheffield, followed by a PGCE in Secondary History.

Prior to retirement Garry was a teacher for 23 years and was an Associate Assistant Principal and Head of Humanities. He leads educational visits to Holocaust related sites across Europe, in addition to historical tours of the World War One battlefields of Belgium and France. He is also a qualified Therapeutic Massage Practitioner and in his spare time enjoys travelling and DIY.

Garry supports several community groups and charities across the town, in particular Armed Forces veterans and the Royal British Legion. Since June 2016, he has jointly organised the annual Retford Armed Forces Day events in Kings Park and Retford Town Hall.