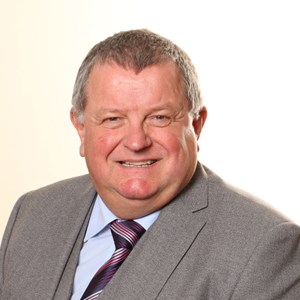 Steve has lived in Costhorpe for the last 27 years with his wife Yvonne who is a Financial Administrator for a local GP surgery. He has two children Heather who works as a Hairdresser at Reality in Worksop and Lee who is an Ambulance Care Assistant for Yorkshire Ambulance Service. He grew up in Creswell and his father worked long hours as foreman at the long gone Gateford Road quarry.

On leaving school Steve joined the Armed Forces and was stationed in England, Germany, Northern Ireland and Norway. On leaving the army he worked for Tommy Roberts haulage in Aston, before going to work for Blyth Marble.

Since then he has been a Company director for a while, before taking up his current post as a youth worker at Carlton in Lindrick Youth Centre. He is a Parish councillor for Carlton in Lindrick and is a big believer in the value of community spirit. As a member of planning committee Steve has seen the challenges that face Bassetlaw District Council to meet the five year Housing land supply target that the government has set and understands that there may be some difficult decisions that the District has to make to achieve its targets. Steve wants to see more affordable housing delivered whilst continuing to improve our own stock of rented properties by working closely with housing and private landlords. As Cabinet Member for Housing, Steve is keen to pursue an increase in the supply of affordable homes that meet residents needs and this could include retirement bungalows, and homes for those who wish to downsize.

Steve loves nothing more than walking his dog, going to his caravan and meeting up with friends to support his football team, Sheffield Wednesday.

Councillor Steve Scotthorne is the Cabinet Member for Housing.