The civic head is the Chairman of the Council who was elected at the Council's Annual General Meeting and will hold office for one year. 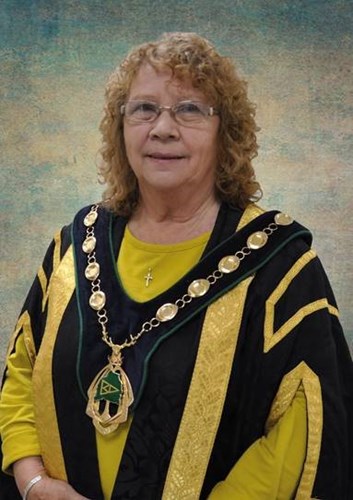 I was born in Shireoaks and moved to Manton, Worksop, at two years old, together with my two brothers.  My third and younger brother being born when I was nine years old.

I attended the local schools which I thoroughly enjoyed and in my Secondary school I was a Prefect and took part in sport, music and drama.

I have three children and four grandchildren. I travelled around the UK and abroad as a wife of member of the Royal Air Force.

I returned to Worksop in 2003 and attended The University of Lincoln gaining an M.A. and B.A. (Hons) in Fine Art. Whilst studying for my Masters Degree I was employed by Boston College in the post of Lecturer in Art and Design where I then gained a Postgraduate Certificate in Education.

On retiring from this post I became involved with Bassetlaw District and was elected as District Councillor for North East in 2014. I have also had the privilege of being Charter Mayor of Worksop from 2018 - 2021.

I am a Qualified Women's Artistic Coach in which I enjoy coaching children and young adults on a part time basis.

In the forthcoming year I will be supporting the Well Being and Mental Health of children and young adults within my role of Chairman of Bassetlaw District Council.

Invitations to the Chairman

The Chairman, or the Vice-Chairman, will attend most events within the District, time permitting.

The Chairman welcomes invitations to attend events in the District. The Chairman likes to be well briefed about any function to be attended, therefore it is best that you provide as much information as possible.

The Chairman of the Council should be met and officially welcomed at a function by a responsible person and escorted to their correct position. The Chairman should, of course, always sit on the right hand side of the host as the appropriate place of honour. The Chairman’s Escort should be placed immediately to the left of the Chairman at a meeting or dinner.

If the Chairman is required to make a speech or reply to a toast, it would be greatly appreciated if as much information as possible could be submitted in advance of the event, such as information about the body organising the event and any words of welcome and thanks which should be included.